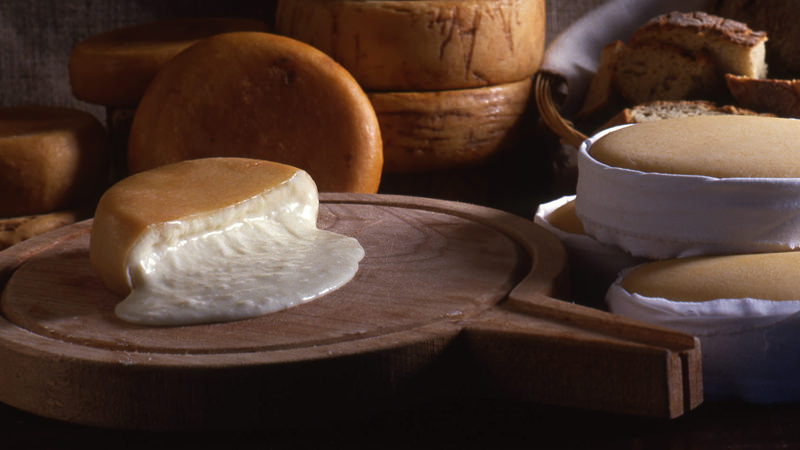 Continuing on with the Spanish/Portuguese Cheese of the day, we have Serra da Estrela!

As previously stated in the last article about Serpa, it and Serra da Estrela are very similar cheeses. Serra has an ancient history, dating back to the Roman Empire. In fact, Serra is the “oldest and most recognized Portuguese cheese” ³. The name “Serra da Estrela” actually translates to “Star Mountain Range” in which ‘Serra da Estrela’ also happens to be the highest mountain range in Portugal. Produced in the Beira Region of Portugal, Serra da Estrela is a semi-soft cheese made from the milk of sheep – Bordeleira da Serra da Estrela ewes to be precise. The flocks are rotated in pastures of the Serra da Estrela range as they graze on flowers, wild herbs and other available vegetation. This produces thick milk that is pleasantly aromatic, leading to a unique cheese. Just as with Serpa, Serra is coagulated with cardoon thistle, and crafted via hand. The curds are broken by the cheese maker’s hands and then formed into the characteristic rounds. As the cheese ages, the rind matures from sticky and pasty, to solidified. Similarly, the pate inside slowly hardens from a ‘spoon-able’ consistency to a form that can be sliced in the later stages of maturation.

As per most of the Portuguese cheeses coagulated with thistle, Serra also has a notable acidity. However, due to the unique diet of the Bordeleira ewes, there is a “sweetness of toffee and a hint of strawberries and thyme.” ¹ Expect an intense flavor with a hint of fresh grass. The creaminess of the pate is a fantastic vessel to carry all of these flavors.

Since Serra is so easily scooped and packed with flavor, all that one needs is a suitable loaf of bread to rescue the cheesy damsel from the castle she is trapped in (the rind). Assuming the cheese is younger and around 45 or so days old, simply remove the surface and allow it to reach room temperature. In addition to bread, a sweet jam or quince paste would contrast the powerful taste of Serra. Local wines of the Beira region tend to be rather fruity which would compliment the cheese perfectly. While a white would suffice, this cheese seems to demand a fruity, spicy red.