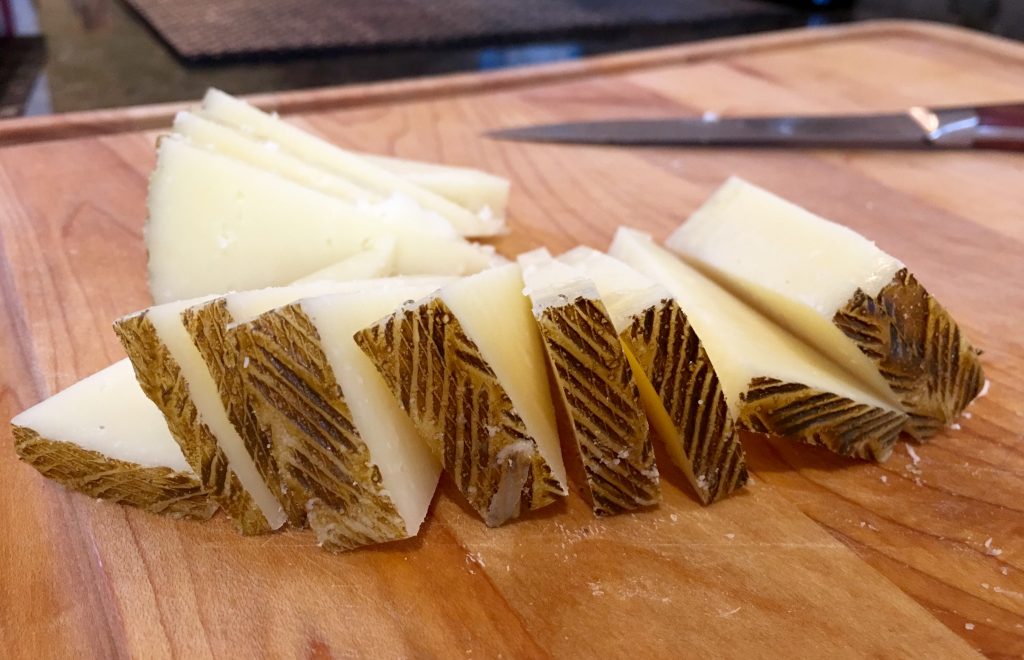 “Perhaps the most famous Spanish cheese, Manchego is a D.O. (Denominacion de Origen) protected cheese, meaning that only 100% Manchega sheep’s milk is used in a traditional recipe. The breed has proven sturdy enough over the centuries to traverse the rocky, arid central plateau region known as La Mancha – where cows just can’t hang. The distinctive criss-cross pattern on the rind points to the traditional use of esparto grass belts to shape fresh curd. This younger, pasteurized selection is great for melting and perfect for parties – traditionally served with marcona almonds and membrillo quince paste“ – Murray’s

This is a definite twist on how a regular cheese review would be written here on ourdailycheese.com, but this simply tied in too well with current events to NOT write. Thus, a narrative-style review is in order. See my previous article on Manchego for a more in-depth look at the cheese and how it is made.

So, given the fact that I have been writing brief articles on Spanish and Portuguese cheeses for the last few weeks, it seemed only right that a search for some of these delicacies be carried out in the Augusta, GA area. My search took me to the Kroger on Washington Rd., not only because of their extensive cheese variety, but also because they have a fantastic produce selection (I love produce). Scanning over the artisan cheese counter, I observed only three cheeses from Spain, two different varietals: Manchego and Drunken Goat. 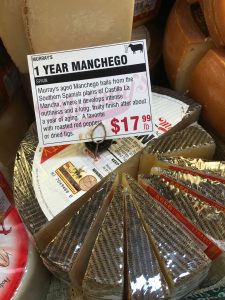 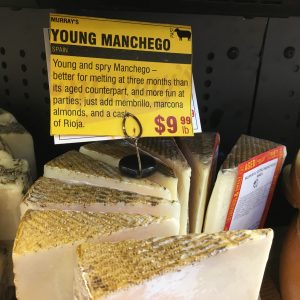 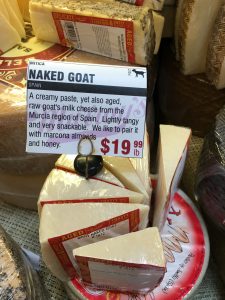 Of the three selections, I went with Murray’s Young Manchego for two reasons: I have had both the 1 year Manchego and the Naked Goat Cheese before, and because I am an economical shopper. Essentially, the killing of two birds with one stone. Taking the Young Manchego to a friend’s home two days later, we cracked open the Spanish delight and tasted it with a nice bottle of “The Other” which is a red blend wine 50% Cabernet Sauvignon, 40% Merlot, and 10% Syrah- a delightful blend. Upon tasting the young Manchego, the appearance was the first thing I noticed. As per the Manchego stereotype, there was a cross-hatched design on the outer rind which was inedible. The cheese itself was firm and sliced easily, but possessed a rather greasy feel to the touch. Once the darker rind was removed, only the creamy white pate remained- time to try it! Upon my initial bite, the Young Manchego tasted nutty with a slight degree of saltiness. This lead way to a noticeable creamy texture/flavor reminiscent of butter. The cheese tasted “ok” but was nothing special. Immediately looking up what wines pair best with Manchego, Tempranillo and Cabernet Sauvignon were the two suggestions. Luckily, “The Other” is 50% Cabernet, so that had to count for something, right? 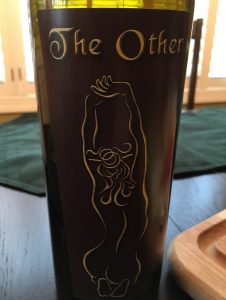 “The Other” Red Blend

A sip of the wine followed by a second nibble of the Manchego presented an ENTIRELY different experience! The cheese tasted exponentially creamier, smoother and had a noticeable increase in saltiness. This was indeed the same cheese, but something about the wine and a second bite, made it that much more appealing. This may sound strange, but I immediately had the mouth feel of trying a smooth cashew or almond butter. That same completely rich and encompassing taste was something extraordinary. So THIS is why Manchego is such a popular cheese?! Having tried a slew of different cheeses throughout my day, I always chopped up Manchego as an over-glorified player, but….I am now a believer. It is like a fine wine that gets better over time and with each sip/bite. Being aged around 3 months, Murray’s Young Manchego has not developed into the full potential of flavor that a more aged Manchego might have, but it absolutely grabbed my attention. After this experience, I simply cannot wait to travel to Spain and compare this cheese with local (non-imported) Manchego, both young and aged. More information about what we find in Spain will be disclosed soon enough. Until then. Cheers!

About the Cheese: Murray’s Young Manchego

These are the pairing recommendations as per the Murray’s website:

“Pour a glass of…

Cider
Brie and apples, cheddar and apples – both delicious! Why not extend that deliciousness to apples in liquid form? Enjoy cider and cheese for a pairing to remember.
English style: drier, more like a beer, with nice acidity.
Pair with: : Just about anything but we love it with firm natural rind cheese, like Landaff.
Basque/Normandy : barnyardy and funky, but still with a little sweetness.
Pair with: A beefy washed rind, like Grayson or Hudson Red to contrast the sugar and bring out the funk.
American Cider: often, but not always on the sweeter side.
Pair with: Sweet and earthy Bleumont Bandaged Cheddar or malty Bleu d’Auvergne.

Pinot Grigio
A lighter, crisper white wine. Tends to be refreshing and fruity, with aromas of stone fruit, peach, quince, and lemon.
Pair with: Creamy goat or mixed milk cheese with a crisp acidic element. La Tur or Brunet are great alongside the fruit-tart flavors of the wine.“ – Murray’s