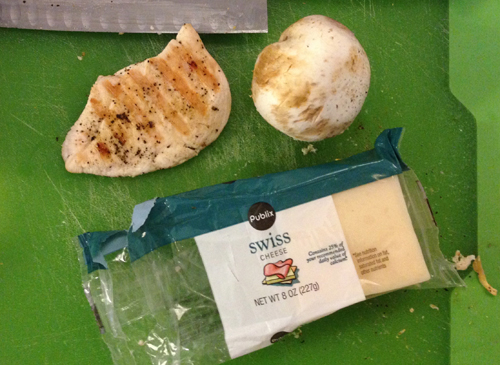 It was dinner time and Mrs. Dan and The Boy was hungry. Mrs. Dan gave me a Cusinart Griller for Christmas. It makes pretty good paninis. So on the way home from picking up The Boy from school we stopped at Publix and grabbed some chicken, sour dough bread and plain old Publix brand Swiss Cheese. After a hard day of work at the office Mrs. Dan let me make dinner. I grilled up the chicken on the Griller with some mushrooms on the side of the chicken stewing in their own juices. After the chicken was done I pull it off, put sliced sourdough bread on to warm up and melt some butter I put on it. As it warmed up I sliced up the chicken and the Publix Swiss Cheese. I then pulled out one slice of the bread, topped it with the cheese, the sliced cheese and topped it with some thinly sliced pickles from Mt. Olive. Tossed it on the grill and covered it with the slice I left behind. Pressed it with the Griller top and let’er sizzle for about 3 minutes. Pulled it off and sliced it i half. Mrs. Dan was happy.

I then made a second but this time without the pickle and added the mushrooms and some Guilden’s mustard. Mrs. Dan was still happy.

We enjoyed it with some Bota Box NighHawk Black.  The 8oz brick of cheese ran me about $4.89. Come to think about it that’s not cheap.